If you're in Istanbul and already tired from sightseeing or just want to get some fresh air, there is ideal option to do that without even leaving the city border. Public ferry will get you to Princes' islands just in 50 minutes.

The ferry looks this way. It has a strict schedule which is followed pretty tight. You better come a bit earlier, especially in a hot day: there are way too many people willing to get to islands.

Simit sellers cruise with the boat almost non-stop. During the hour trip people are getting hungry and happily buy the bagel.

People buy the thing also to feed seagulls. Those birds follow the ferry for quite a while with hope to get some food.

There are several islands, but tourists usually visit the biggest one — Büyükada. It's forbidden to drive vehicles on the island (with exception for service workers), thus tourists normally either take a bicycle, either rent a horse. It's allowed to walk as well, but the distance is quite big.

I took a bicycle. However I saw a couple of electronic cars inside the island.

The houses are very cozy. It's like a luxury place to own a house nowadays. However a few centuries ago it was a place to exile noble people (if they had to be exiled).

Shahid cemetery. I was very surprised to see photos with names and dates right on the fence. Normally there is nothing similar to that.

There is even a church (well, several of them). There were so many nations on the island and every one of them put own church: Greeks, Armenians, Russians. There is even a synagogue.

If you don't like all the religious places, there are beaches around. None of them are free. And it wasn't cheap at all. I could barely bargain the price down by 25%, but the host was way too reluctant to go down.

It was very cool to walk on island streets as well.

I managed to come back only by sunset. I didn't expect the trip to take the whole day. It seemed like "there's no way I could spend the entire day on this island". Turns out there's. I even was going to visit at least 2 islands. But managed just one. 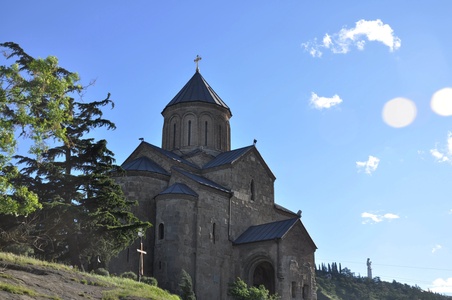